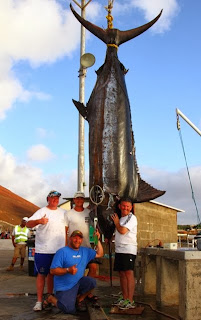 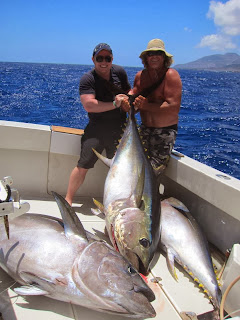 Our last Customers were Morten and Hermann from Norway. They released 5 Blue Marlin and had a very good time on the SMOKER.

Dino from Mozambique fished the 4th of July World Cup with us , but no luck. The day before he caught a 200 plus big Eye tuna.

Our season is over now for 2013.
SMOKER , his anglers and crew managed to release 114 Blue Marlin in 98 days of fishing.

Thanks to all our anglers and crew.

Special thanks to Black Bart Lures, Makaira Pulling Lures , Andy Moyes and Pelagic Gear to rig us up with nice tackle.

For 2014 we still have 3 weeks available on CV. Please also check our results on Ascension Island and the Canaries. 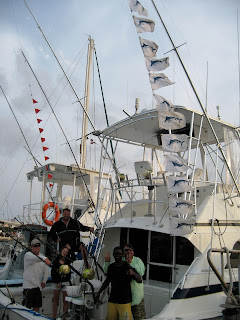 Kai Witt and his anglers from Germany had a great time at their first visit to Ascension Island. They caught a lot of different species, including countless tuna and amberjacks. The boys also got 4 tuna over 100 KG . They come back for sure as ASC is hard to beat for getting your rod bend. 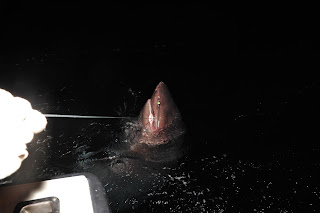 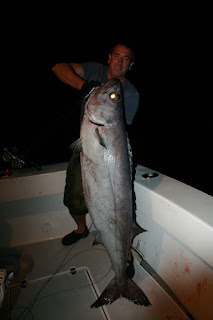 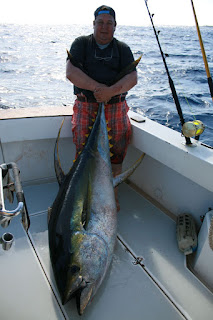 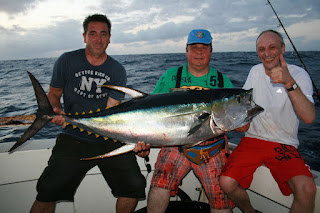 Great tuna fishing on Ascension. All the guys are catching nice tuna up to 250 lb. Average are tuna from 50 to 120 lb but there are quiet afew nice ones around. Apart from that countless jacks and grouper for our jiggers. 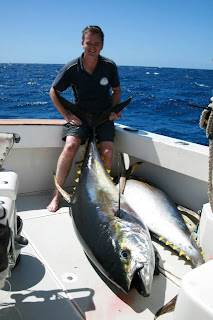 We had 5 days of very bad weather and slow fishing. Really unlucky for Clive, Dave and Rob who only caught 1 Blue and had another 3 bites. Terrible wind gave us now  chance to move and find some fish somewhere else.

After fishing and weather became better and Stefan Kreupel caught 6 Blues out of 13 bites. He raised another 5 fish which did not bite.
Publicado por Matthias Henningsen en 15:28 No hay comentarios:

Bjoern came back with his friends Max, Sally and John. Fishing was slow and weather terrible but at least they caught a 750 lb Blue during their 4 days and had 3 more bites.
It was Sallys first Blue Marlin ever!!
Publicado por Matthias Henningsen en 9:05 No hay comentarios:

Like every year we fished with our good friends Fita, Manolo and Pepe from the Canary Islands.
WE went to San Nicolau for 4 days and fished another 2 days in Mindelo.
We ended up with 10 Blue Marlin releases out of 14 bites.
Fita caught her first Blue Marlin stand up, pitching a Balyhoo to him.
Well done and see you next year! 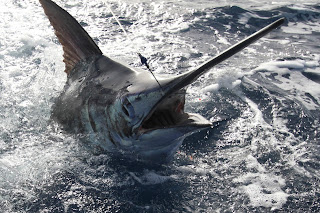 We had Jens and Karl for 6 days on SMOKER and went to San Nicolau. Fishing was good for the first 4 days and we caught 16 Blues out of 32 bites. The last 2 days were slow and we only got one bite.

After Bob, Wade and Tom fished with us. This week was a bit slower but we still managed to release 6 Blue Marlin and 1 Yellowfin Tuna. For Tom it was his first Blue Marlin ever.

Mike and John just finished their 2 week trip on SMOKER. We fished in San Nicolau, San Antao and Sao Vicente always trying to be on the top spot.
Mike and John managed to release 38 Blue Marlin out of 71 bites. An average of 5 Blue Marlin seen per day.
The biggest were 650 and 600 pound, most fish in the 250 to 350 range with a few 400 to 500 pounder.
Thank you Mike and John, see you next year again. 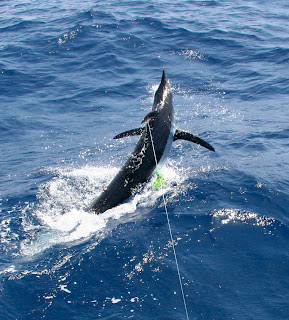 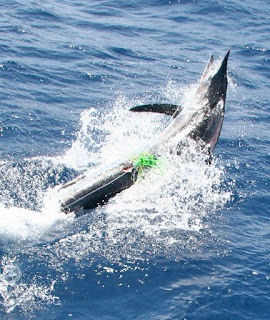 We are fishing with Mike and John from Florida , some very keen Marlin fishermen. The first 4 days we went 4 for 9 . Fishing is on and off and tomorrow we go to San Antao where one boat had some great fishing today. 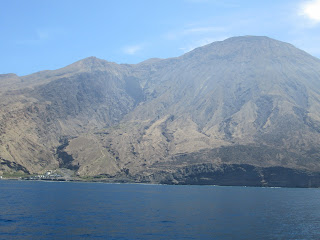 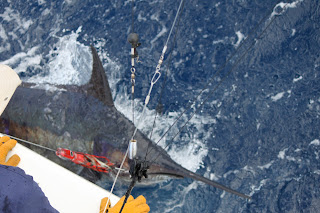 SMOKER has been fishing San Nicolau the last 4 days and caught 11 Blue Marlin out of 20 bites. We raised another 4 Blue Marlin which did not bite.
Albi, Bjoern and Pat doing very well on the pitch bait. Weather is good and we are looking forward to go out tomorrow. 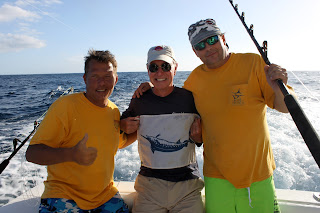 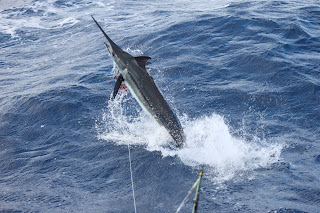 Fisihing still is not real hot but there are a few around. San Nicolau has still green water , Sao vicente does not show a lot of bait and most fish are in Sao Antao at the moment. SMOKER fished 4 days in Sao Antao with our norwegian anglers and they released 5 Blue Marlin. That was their first Marlin experience so they went very happy.Thank you Robert, Niels, Arne and Rune for a great time.

Now we fish with our long time friends from Finnland . They brought around a new friend and caught today his first Blue Marlin ever, a 450 pounder!
Congrats to Ismo! 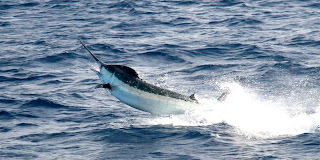 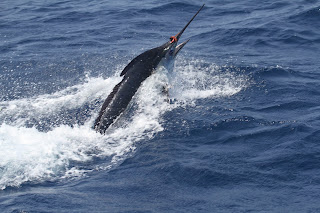 Another GRANDER for Harmattan on Ascension!!

Angler Kevin from the UK caught his first Blue Marlin ever and it weighed in at 1320 lb !!! 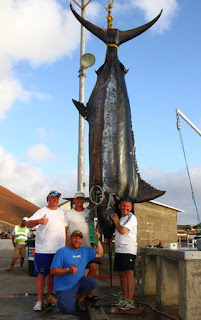 The marlinbite is pretty slow but the guys on HARMATTAN are catching a lot of tuna and other inshore species. Most tuna re around 40 to 100 lb but ther are always some nice ones like this 234 lb pound big eye. 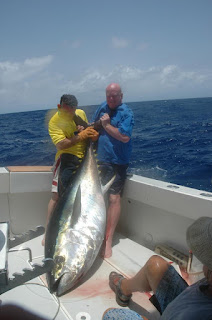 2013 Season has started! HARMATTAN is on the water again. They boys were catching a lot of tuna, dorados and jacks during the first week.
They released a 700 lb Blue Marlin, pulled the hook on another one and raised a real NICE ONE which did not bite. 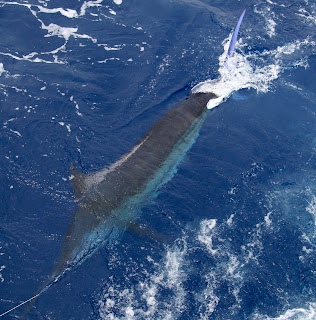